So you want to help change Shipley for the better? Wear your badge with pride…

A few months ago, one of our enterprising members came up with the cracking idea of making a Labour badge with a picture of the Shipley Clocktower on it and the words ‘For The Many’ as a way of raising funds for Shipley Branch. As you can see it’s an eye-catching design and like Blackpool has its tower or Las Vegas has its casinos, once seen it’s never forgotten and easily recognisable on the badge if you live in Shipley (and beyond). As a fund-raiser it’s been super effective and at a pound a pop it’s proved to be a real hot seller but it’s also had a really interesting effect on those that wear it…

Picture the scene, I’m stood on the train, I’m stood in a shop queue, I’m stood in the pub or I’m just walking out and about and time and time again someone starts up a conversation about it. Sometimes that conversation only goes as far as the person saying to me “Is that Shipley clock tower?” to which I reply “Yeah, it’s the Shipley Labour Party badge” but more often than not it leads to a conversation about anything from talking about Bradford Council or the Labour Party in general to someone wanting to sound off about what Labour has or hasn’t done or could do better.

Not every conversation is positive of course, but the fact that it opens up one with a stranger about the state of things is the real gem here. Often I’ll have a brilliant chat about Labour and more than a few times I’ve come away with a great sense we’re going down great with Labour voters who seem more than happy to tell me about what’s right with the new manifesto (rail nationalisation and council house building seem to be mega popular), other times it’s enabled me to counter some of the negative stuff that the newspapers seem to churn out or get a lead on some local concerns which I can filter back to the Branch and to Vick Jenkins, prospective Council candidate in Shipley ward and Jo Pike our prospective MP. If you think about it, it’s a bit like a version of door knocking except that it’s the other person that’s knocking on your door and initiating the conversation. And I get the feeling that people like chatting to us, that we’re not the crazed radicals that some newspapers seem to try to paint us as, we’re actually just a bunch nice people who, just like them, want the best for our families and communities.

Another positive effect is that wearing the badge points out to the local shops and restaurants in a great way just how many of us shop there, and often it’s given shops a great link and way to communicate to us their feelings on things like the Oastler Road car park or their views on anti-social behavior. Again this is a brilliant way of feeding back important issues we can campaign on or help with.

When I think about it, it also points out to people just how many of us there are which is morale boosting too, I love seeing other people I’ve never met before wearing the badge and giving them a smile of acknowledgement as we both realise we’re Labour supporters. And on more than one occasion it’s even led to a conversation about when the next CLP meeting is. Some people have even expressed how cool the badge looks and want to know where they can get one.

So, here’s an interesting thought to end with. If every Shipley Labour member bought a badge and wore it, it’d be not only a corking way to raise funds but just imagine all those conversations we’d be having and all those opportunities to get a chance to put over our Labour values. 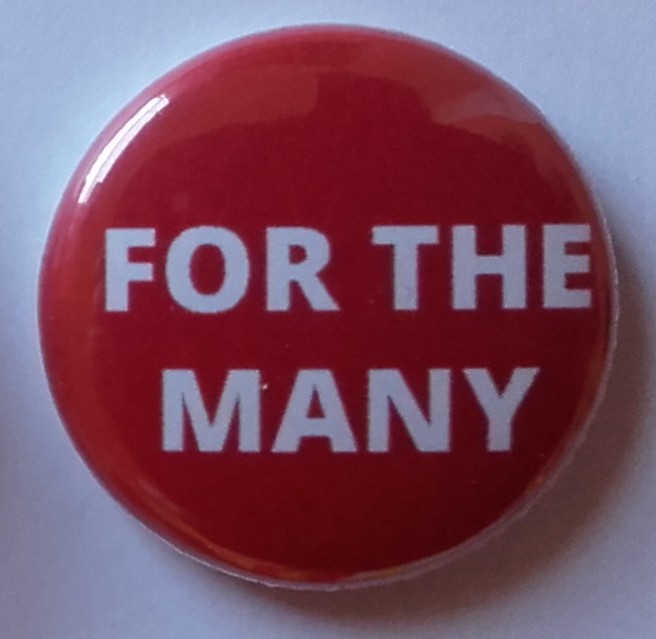